HomeAboutNewsJason Isbell and the 400 Unit

Jason Isbell and the 400 Unit

ON WEDNESDAY, JANUARY 25 AT 8PM

Jason Isbell has established himself as one of the most respected and celebrated songwriters of his generation. The North Alabama native possesses an incredible penchant for identifying and articulating some of the deepest, yet simplest, human emotions, and turning them into beautiful poetry through song. Isbell sings of the everyday human condition with thoughtful, heartfelt, and sometimes brutal honesty. Isbell broke through in 2013 with the release of Southeastern. His next two albums, Something More Than Free (2015) and The Nashville Sound (2017), won Grammy Awards for Best Americana Album & Best American Roots Song. Isbell's song "Maybe It's Time" was featured in the 2019 reboot of A Star Is Born.

His most recent full-length album, Reunions (2020), is a critically-acclaimed collection of ten new songs that showcases an artist at the height of his powers and a band fully charged with creativity and confidence. In April of 2021, it was announced that Isbell would appear in the upcoming Martin Scorsese film, Killers of the Flower Moon.

Peter One is a singer-songwriter from Côte d’Ivoire, currently living and making music in Nashville, TN. In the 1980s Peter One and his then duo partner Jess Sah Bi released their debut LP, Our Garden Needs Its Flowers, to mass appeal. The act quickly became one of the most popular bands not only in the Ivory Coast but all of broader West Africa, filling stadiums and playing on television and radio across the continent on many occasions. Due to the violent political unrest and economic hardship in Côte d’Ivoire, Peter immigrated to the US in the 90s to pursue his musical career.  That plan was quickly derailed. Over the last 20 years, Peter has worked as a nurse in the United States, while slowly writing and recording music at home. He's now finished his first new record in over three decades. Stay tuned for more to come on that. 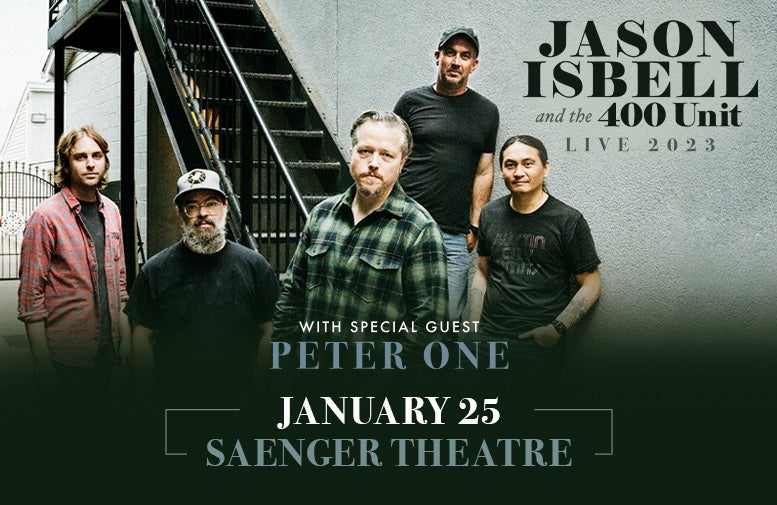 Jason Isbell and The 400 Unit

with special guest Peter One