April 15th, see a Black Jacket Symphony show unlike any we’ve ever done before—a full set of greatest hits from our most popular shows over the last 13 years! After our performance of “Synchronicity”, we’ll return with an all-star cast of Black Jacket Symphony musicians to perform greatest hits from artists like the Eagles, Led Zeppelin, Tom Petty, The Police, The Who, The Beatles, and more! Don’t miss this one-of-a-kind rock and roll celebration live at the Saenger Theatre April 15th!

The Black Jacket Symphony offers a unique concert experience through recreating classic albums in a live performance setting. A selected album is performed in its entirety by a group of handpicked musicians specifically selected for each album, with no sonic detail being overlooked--the musicians do whatever it takes to musically reproduce the album. The performance is separated into two sets--the first set features the album being recreated as a true symphonic piece. 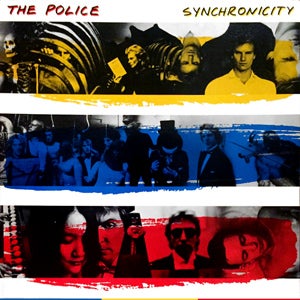 Synchronicity is the fifth and final studio album by English rock band the Police, released on 17 June 1983 by A&M Records. The band's most successful release, the album includes the hit singles "Every Breath You Take", "King of Pain", "Wrapped Around Your Finger", and "Synchronicity II". The album's title and much of the material for the songs were inspired by Arthur Koestler's The Roots of Coincidence. At the 1984 Grammy Awards the album was nominated for a total of five awards, including Album of the Year, and won three. At the time of its release and following its tour, the Police's popularity was at such a high that they were arguably, according to BBC and The Guardian, the "biggest band in the world".

Synchronicity reached number one on both the UK Albums Chart and the US Billboard 200, and sold over eight million copies in the US. The album was widely acclaimed by critics. Praise centred on its cohesive merging of disparate genres and sonic experimentation. Rolling Stone described "each cut on Synchronicity [as] not simply a song but a miniature, discrete soundtrack". It has since been included in the magazine's lists of the "100 Best Albums of the Eighties" and the "500 Greatest Albums of All Time". In 2009, Synchronicity was inducted into the Grammy Hall of Fame.